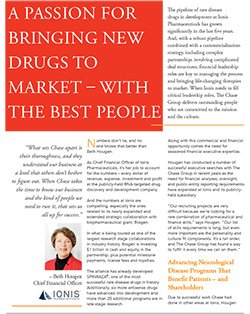 The pipeline of rare disease drugs in development at Ionis Pharmaceuticals has grown significantly in the last five years. And, with a robust pipeline combined with a commercialization strategy, including complex partnerships involving complicated deal structures, financial leadership roles are key to managing the process and bringing life-changing therapies to market. When Ionis needs to fill critical leadership roles, The Chase Group delivers outstanding people who are committed to the mission and the culture.

“What sets Chase apart is their thoroughness, and they understand our business at a level that others don’t bother to figure out. When Chase takes the time to know our business and the kind of people we need to run it, that sets us all up for success.”

Numbers don’t lie, and no one knows that better than Beth Hougen.

As Chief Financial Officer of Ionis Pharmaceuticals, it’s her job to account for the numbers – every dollar of revenue, expense, investment and profit at the publicly-held RNA-targeted drug discovery and development company.

And the numbers at Ionis are compelling, especially the ones related to its newly expanded and extended strategic collaboration with biopharmaceutical giant, Biogen.

In what is being touted as one of the largest research stage collaborations in industry history, Biogen is investing $1 billion in cash and equity in the partnership, plus potential milestone payments, license fees and royalties.

The alliance has already developed SPINRAZA®, one of the most successful rare disease drugs in history. Additionally, six more antisense drugs have advanced into development and more than 20 additional programs are in late-stage research.

Along with this commercial and financial opportunity comes the need for seasoned financial executive expertise.

Hougen has conducted a number of successful executive searches with The Chase Group in recent years as the need for financial analyses, oversight, and public-entity reporting requirements have expanded at Ionis and its publicly-held subsidiary.

“Our recruiting projects are very difficult because we’re looking for a rare combination of pharmaceutical and finance skills,” says Hougen. “Our list of skills requirements is long, but even more important are the personality and cultural fit components. It’s a tall order, and The Chase Group has found a way to fulfill it every time we call on them.”

Due to successful work Chase had done in other areas at Ionis, Hougen

was introduced to the Chase team, and their methodology quickly won her over.

“The Chase team proved themselves and their credibility immediately,” says Hougen. “They explained their process, and I could tell from their questions they were looking for skills fit, communication fit, and cultural fit. I was impressed.”

Perhaps one of the best indicators of success in recruiting is the tenure of placed executives. More than five years later, the first executive placed by Chase within Hougen’s team is still at Ionis today and doing very well.

“Their first project for my team was a success which, of course, is why we continue to work with them. The Chase Group has an overall professionalism and attitude that makes them easy to engage,” says Hougen. “The value and performance are always there, too.”

“The Chase team proved themselves and their credibility immediately. They explained their process, and I could tell from their questions they were looking for skills fit, communication fit, and cultural fit. I was impressed.”

The demands for top finance talent are only increasing at Ionis. Ionis has an extensive pipeline and a commercialization strategy, which relies in part on complex partnerships with complicated deal structures.

“Our strategy and our status as a public company means we need finance executives who can handle growth, keep pace with change and have experience in publicly traded companies,” says Hougen.

The Pains and Gains in Brief

Hougen says one of the main reasons she likes working with The Chase Group is their meticulousness.

“What sets Chase apart is their thoroughness, and they understand our business at a level that others don’t bother to figure out,” says Hougen. “When Chase takes the time to know our business and the kind of people we need to run it, that sets us all up for success.”

The Chase Group works with biotechnology, pharmaceutical and life science companies worldwide to help them find the best talent for their executive teams.
Learn more at www.chasegroup.com or call Karen Leathers, President, at (913) 663-3100. 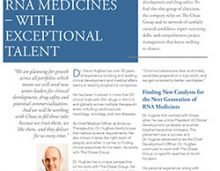 Building the Next Generation of RNA Medicines – With Exceptional Talent 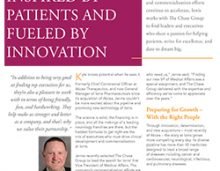 High Expectations, Inspired By Patients and Fueled By Innovation 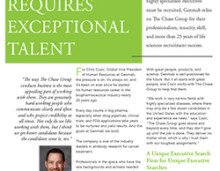